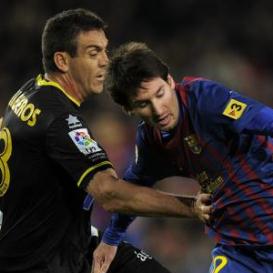 Barcelona responded to Real Madrid’s win at Sporting Gijon earlier today by hitting Levante for five at the Nou Camp.

With Madrid having taken control of the title race over recent weeks, Barca kicked off this clash six points behind their bitter rivals having played the same number of games.

But, with El Clasico on the horizon next weekend, they put on a show that suggested they are ready to fight to retain their title.

Cesc Fabregas got them going with a first-half brace, while Isaac Cuenca, Lionel Messi and Alexis Sanchez also found the net.

Having watched on as Madrid notched up another routine win earlier in the day, Pep Guardiola’s men knew a strong start was needed if they were to get on top of a Levante side still riding high after a surprise start to the season. Javier Mascherano Hit Out At Liverpool