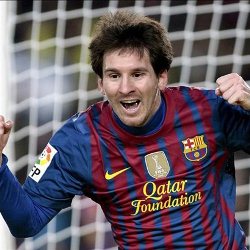 Lionel Messi helped himself to four goals as Barcelona came from behind to defeat Valencia 5-1 and solidify second place at Camp Nou.

The reigning Spanish and European champions appeared to be in for a tough evening when they fell behind to Pablo Piatti’s ninth-minute volley, but instead snapped into life and went into the interval ahead after Messi struck twice.

He doubled his tally in the second period to take his tally for the season to 43 and close in on Cristiano Ronaldo’s position as top goalscorer in La Liga, before substitute Xavi capped his return from injury by adding a fifth at the death.

Though the Catalonians remain ten points behind Jose Mourinho’s rampant Real Madrid, the win does extend the gap between themselves and third-placed Valencia, who lost Miguel to injury during the first half, to 11 points.