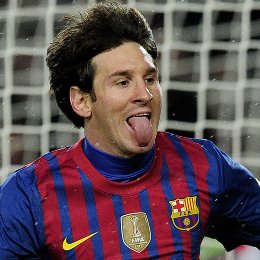 The Argentine World Player of the Year, still only 24, also set a Spanish record of 54 goals in all competitions in a single season with more than two months of the campaign remaining and overhauled Cristiano Ronaldo to top the La Liga scoring charts on 34 goals.

After Xavi’s fourth-minute opener at the Nou Camp, Messi made it 2-0 in the 17th minute to match Cesar Rodriguez’s 60-year-old mark of 232 goals.

Barca seemed in complete control but Granada pulled a goal back 10 minutes into the second half when Diego Mainz nodded in from a free kick and the visitors grabbed a shock equaliser from the penalty spot seven minutes later after Daniel Alves fouled Daniel Benitez.

Guilherme Siqueira kept his nerve to beat Victor Valdes and make it 2-2 before Messi restored Barca’s lead just over 20 minutes from time.

He sped clear from an Alves pass and lifted the ball over Granada goalkeeper Julio Cesar to set a new all-time scoring record before substitute Cristian Tello made it 4-2 in the 82nd minute when he followed up from Messi’s angled strike.

Messi completed his hat-trick four minutes later, his 234th Barca goal in official matches, and in an eventful finale Alves was shown a second yellow card and dismissed for a handball in the area.

Siqueira beat Valdes from the spot for a second time as Granada became the first team to put three goals past Barca at the Nou Camp this season.