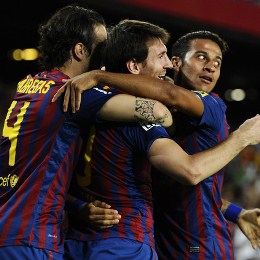 European champions Barcelona produced a rampant performance against overwhelmed Osasuna to bounce back from a difficult week.

Pep Guardiola’s side were eager to make a statement after allowing both Real Sociedad and AC Milan to snatch draws in the last seven days and did so in style in Saturday’s Primera Division clash at the Camp Nou.

Lionel Messi started and finished the scoring en route to an impressive hat-trick while David Villa scored two, Cesc Fabregas and Xavi grabbed one each and defender Roversio scored an unfortunate own goal.

Barca, traditionally slow starters under Pep Guardiola, had won one and drawn one from their opening two La Liga games while allowing Milan a late equaliser in the Champions League on Tuesday.

Lionel Messi Out For Three Weeks With Thigh Strain