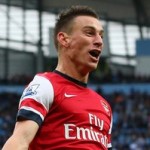 Arsenal have been warned they face a major fight to keep £15million-rated defender Laurent Koscielny.

Bayern Munich and Barcelona are hot on the trail of the Frenchman this summer. Koscielny has already opened the exit door by claiming he could walk away if Arsenal fail to show ambition in the transfer market.

And his agent Stephane Courbois has now fuelled fresh talk that Koscielny, who has four years left on his contract, is a target for the European giants.

He said: “There is interest. I know that Laurent is part of a shortlist of three or four players for both clubs.”

Arsene Wenger would loathe to lose the 27-year-old centre-back who enjoyed his best season since joining Arsenal in a £8.5m switch from Lorient three years ago. But Koscielny’s words echo those of Robin van Persie, who left the Emirates for Manchester United last summer.

The Dutchman identified the club’s lack of drive to win major trophies as a key reason behind his decision to quit.