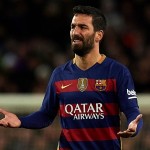 Reports have emerged claiming that Arsenal have been offered Barcelona attacker Arda Turan.

AS reported that the Barcelona midfielder has an uncertain future at the Nou Camp despite only making his debut for the Catalan giants in January.

Turan has only made nine La Liga starts since the start of the year and although Luis Enrique has been pleased with Turan’s displays, he understands he will want more regular game time.

As a result, it has been reported that he will not stand in his way should he want to find another club.

Arsenal are said to be one of the teams interested and will watch his progress.