Reports are out claiming that Barcelona attacker Cristian Tello has completed his move to Porto. 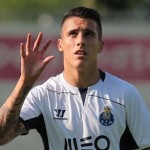 The Spanish international joins Porto on a two-season loan.

The 22-year-old has scored 11 league goals in three seasons with the Primera Division club but looks poised to leave Spain for Portugal permanently, with the loan arrangement allowing the Dragons to purchase Tello in two years’ time.

A statement published on Porto’s official website revealed Tello was preparing to fly to Holland and join his new team-mates for the final days of a pre-season training camp in Horst.