Reports are out claiming that Barcelona have confirmed the signing of Arda Turan. 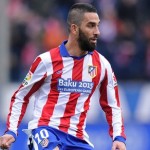 The Catalan giants have signed the Turkey captain on a five-year contract from Atletico Madrid for an initial fee of £24.1million (€34m).

The 28-year old attacking midfielder had been heavily linked with Premier League trio Arsenal, Chelsea and Manchester United but has left Atletico to join treble-winners Barca despite the fact he will be ineligible to play until January 2016 because of the club’s transfer ban.

Regarding the Barcelona presidential elections, the Catalan club reserve the right to re-sell the player to Atletico until 20 July.

A club statement read: “The agreement includes the option of selling the player to Atletico Madrid for the fixed fee less 10% option costs.

“This option could be exercised by FC Barcelona up until midnight of 20 July if the next Board of Directors should wish so.” Arsenal Hero Urging Wenger Not To Gamble On Alexis Sanchez