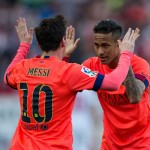 It has been reported that Neymar blew a fuse after being hooked by Barcelona coach Luis Enrique during their 2-2 draw at Sevilla.

AS says what apparently angered the Brazilian international on Saturday was that Enrique hooks him even when he is playing well.

There have been days when the Brazilian has been called to the bench having scored one or two goals, as was case on Saturday. It occurred against Levante, Rayo and Eibar.

“I’m not interested in pettiness and nonsense,” Enrique responded to questions about Neymar’s histrionics.