It has been reported that Bayern Munich wing-back David Alaba has some of Europe’s biggest clubs monitoring his contract situation. 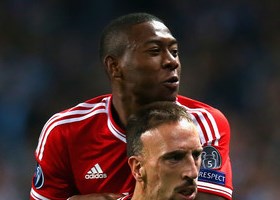 The 21 year old is inside the final two years of his current deal and admits there’s been no approach from Bayern officials about opening talks over a new agreement.

“Bayern is my first point of contact and the rest will be seen. It’s no secret that I feel good here, but at the moment I’ve not given any thought,” said Alaba.

Sport reported that Barcelona, Arsenal, Chelsea and Manchester City are keen to tempt the Austria international away from Munich.

Alaba’s advisers are unhappy with Bayern dragging their feet over contract talks as the youngster is currently on just a quarter of what Mario Gotze is now earning.