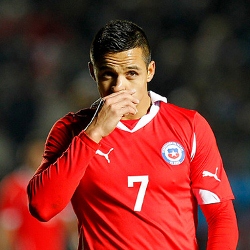 Reports have surfaced that Barcelona have agreed to sign Chile forward Alexis Sanchez from Udinese on a five-year contract.

The Spanish and European champions said on their official website : “Udinese and FC Barcelona have reached a final agreement for the transfer of Alexis Sanchez,”.

Barca will pay 26 million euros ($36.9 million) plus 11.5 million in variables and the player will sign his contract after completing a medical on Monday, the club said. Barcelona to make double bid for Aguero and Kompany