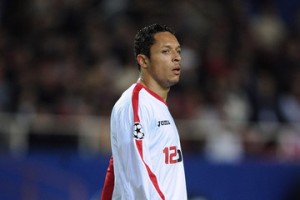 Reigning Spanish champions FC Barcelona are closing in on a deal for Sevilla wing-back Adriano.

The 25-year-old Brazilian, who can also operate at left-back and on the left side of midfield, is reported to be discussing personal terms with the Spanish champions.

Adriano is poised to become the second new arrival at the Nou Camp this summer following David Villa’s switch from Valencia.

“On Saturday I received a call from (Barcelona president) Sandro Rosell and negotiations started.

“Adriano is negotiating with the club but between Barcelona and Sevilla there is a preliminary agreement in place.”

It is believed that Barcelona will pay Sevilla 13.5million euros for Adriano.

“It’s a very good offer considering the years that Adriano has been with us and his performance in the past two seasons,” said Del Nido.

“The player also wanted to open a new chapter in his career.

“The offer was accepted because it was good and because the player wanted to leave.

“He leaves the club on a high note having won six trophies out of seven finals played.

“We are eternally grateful to him.”