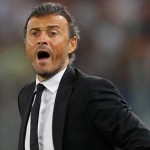 Reports are out claiming that Barcelona coach Luis Enrique has shrugged off being nominated for the coaching Ballon d’Or.

Asked about being shortlisted for it, Lucho replied with humour.

He said: “The best coach award? They’ll give me the golden cucumber next. I’m not interested in individual awards.”