It has been reported that Barcelona coach Luis Enrique has snapped back at Jeremy Mathieu after defeat at Real Madrid. 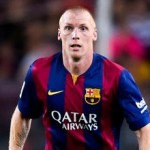 The French international said he was “surprised” to be played at left-back on the night, having impressed at centre-half going into the El Clasico.

“I know and I get the criticism, generally its responsible, but it was negative regarding Mathieu.

“He can play centre-half or fullback, but If he’s surprised playing fullback, forget him…”

Barcelona To Go All Out To Keep Hold Of Pep Guardiola