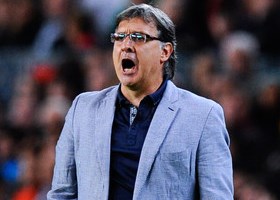 It has been reported that Barcelona coach Gerardo Martino refuses to give up on the title.

The Spanish giants go into Saturday’s match against Getafe four points behind leaders Atletico Madrid – who they face on the final day of the season – with three matches remaining.

Martino is confident they will emerge full of fight today.

“These players have never tired of competing and winning,” he said.

“When there are serious difficulties and situations, they still compete.”