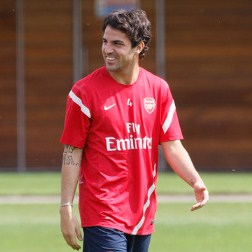 Reports are out in Spain that Arsenal midfielder Cesc Fabregas has signed for Barcelona.

Catalan daily Sport has reported that the midfielder is on his way to Barcelona to undergo a medical after a five-year deal was agreed.

There was no mention of a transfer fee, but Barca are thought to be paying up to £27 million with Fabregas’s signing-on fee making up the difference to Arsenal’s downgraded valuation of around £30m.

Fabregas has been the subject of one of the most protracted transfers in history. He was brought through the Catalan club’s youth system before departing for Highbury at 16 years of age.

Now 24, he has long pined for a return – and delighted Barca stars Victor Valdes and Gerard Pique hinted this morning that a deal was about to go through.

“I think we have good news,” goalkeeper Valdes told a news conference. ”Talks are very advanced. I cannot imagine Barca next season without Cesc. It is close. In a few hours they will announce his signing.”

Pique, who grew up playing in the Blaugrana youth teams alongside Fabregas, tweeted: ”Today is going to be a great day!!”

David Trezeguet Linked With A Move To Aston Villa