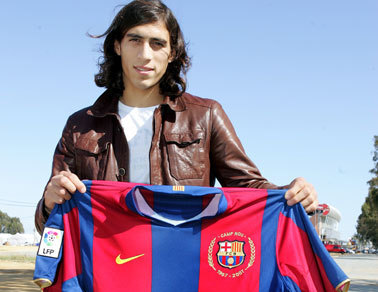 Italian giants Juventus are putting the final touches on a deal for Barcelona defender Martin Caceres.

Local Italian newspapers have reported that the agreement is near to being completed and will see Caceres joining Juventus on a season-long loan.

It is also reported that the 22 year-old Uruguay international defender will be able to sign permanently with Juventus for £8 million if the club wishes to do so.

Caceres joined Barcelona on June 4, 2008, with a reported transfer fee of €16.5 million being paid to Villarreal. A buyout clause of €50 million was also included in the deal, which runs through the end of the 2012 season.

Caceres’s natural position is playing as a centre back, but he is also known to be versatile defender as he can play at right back and left back position.