Reports are out claiming that Barcelona are reluctant to sell Pedro to Manchester United, Arsenal until mid-August. 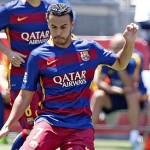 United are lining up the Spaniard as a replacement for Angel di Maria, who is on the brink of signing for PSG.

The Premier League giants have held talks with Barca about a fee for Pedro and are close to settling on terms in the region of £22 million.

AS, meanwhile, says Barca want to hold onto Pedro until they’re beyond their Super Cup commitments.

With their Copa America stars granted an extended summer break, Barca need as many first teamers available as they can with the European Super Cup against Sevilla to be staged in a fortnight’s time.

Barca also have the Spanish Super Cup against Athletic Bilbao, home and away, mid-August.

United were informed last week that any deal for Pedro would have to wait until after their Super Cup double.