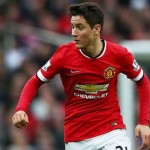 Reports are out claiming that Barcelona have made Manchester United midfielder Ander Herrera a priority transfer target.

The People revealed that Barca sporting director Ariedo Braida is desperate to land Manchester United midfielder Herrera and will approach Old Trafford bigwigs to see if a deal can be set up for the next winter window.

The 25-year-old Spaniard has been an impressive performer over the second half of the season after a slow start.