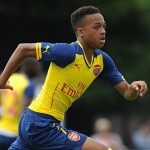 Reports are out claiming that Barcelona are eyeing Arsenal teen Chris Willock.

The Mirror claims that the Spanish giants are eyeing Arsenal midfielder Willock, 17.

Willock is seen as being one of Arsenal’s best prospects.

Arsenal have snatched a host of young players from Barca in the past, including Cesc Fabregas and Hector Bellerin.

But now it seems as if Barcelona are ready to try and play Premier League teams at their own game.