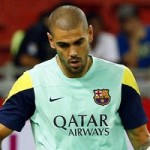 It has been revealed that Barcelona president Sandro Rosell is frustrated by Victor Valdes’ contract stand-off.

The Spanish international goalkeeper refuses to consider new contract talks and is sticking to his plan to leave on a Bosman next summer.

Sportyou claims that Rosell is baffled by Valdes’ decision and unhappy that he refuses to reverse his decision over a new contract.

Valdes is a product of the Barcelona youth system and has made a total of 501 appearance for the Spanish champions.

Guardiola : Lionel Messi Is The Best Ever!