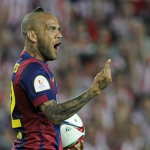 Reports are out claiming that Manchester United appear to have won the race for Dani Alves with reports suggesting the Brazilian has agreed to a move to Old Trafford.

According to reports in Spain, Alves has put pen to paper on a pre-contract agreement, which would see the dashing full-back join the Red Devils on July 1 after his current contract with Barcelona expires.

Alves has recently spoken of his dissatisfaction at the Nou Camp, where he has made over 200 appearances.

“I don’t think about money, all I am asking for is respect for the job I do like any other professional.

“What I cannot abide is when everything I have done during all of my time at this club is devalued – more than what a few people inside the club might think about me.”

Should the move to United come to fruition, Alves’ last game for the Catalan giants will be this weekend’s Champions League final against Juventus.