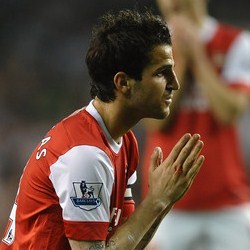 Sensational news are out and it has been revealed that Barcelona have been set a two-week deadline to meet Arsenal’s asking price for Cesc Fabregas.

The Sun has reported that the European and Spanish champions have two weeks to meet Arsenal’s £40million asking price for Cesc or the unsettled Spanish midfield star will stay put at the Emirates.

Last night a top Barca source admitted: “Arsenal have let it be known that unless a deal for Cesc is sorted by the end of the month then he will stay in London.

“They said although they never wanted to sell their captain they were prepared to reluctantly accept Cesc’s request to come home.

“They’ve insisted they have been very fair to Cesc and Barcelona and this situation is not healthy for them and has to end.

“They are not prepared to wait much longer and after staying silent throughout the summer, they will issue a public statement to draw a line under this matter at the start of next month.

“We understand there is no way they will sell Cesc for what we offered but the decision rests with our president Sandro Rosell.”