It has been reported that Victor Valdes has already determined that his future lies with Monaco and a deal could be announced in January. 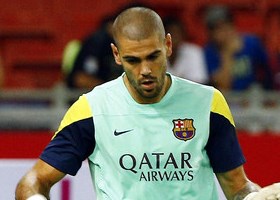 The Barcelona and Spanish international goalkeeper has made clear since the end of last season his resolution not to renew his contract at the Camp Nou.

With his current deal set to expire in June 2014 and with the club having opted against selling him this summer, the 31-year-old is free from the start of the year to officially negotiate a Bosman move for the end of the season.

Speculation in recent weeks has linked Monaco with interest and a possible bumper contract offer and links have been encouraged further by the player’s own recent hints.

Radio Catalunya today suggest that Valdes has already made clear his decision is to sign with the principality outfit and, described at 99 per cent decided, could announce his intention during January.