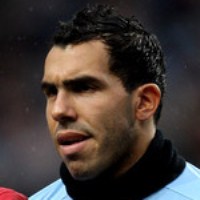 It has been reported that Premier League rich boys Manchester City are facing another battle to keep striker Carlos Tevez.

It is said that European giants Barcelona and Inter Milan have already made their interest known and Eastlands chiefs are convinced their skipper will look for a move in the summer.

Tevez’s advisors wanted to re-negotiate his City deal, but the club refused.

The Argentine international striker, now age 27, is already the country’s best-paid player on £257,000 a week and is only in the second year of a five-year contract.

City hope to thrash out a compromise with an image-rights deal which could net the striker a further £40,000 a week.

But they fear even this may not be enough to appease his advisors.

City talked Tevez out of quitting when he handed in a transfer request earlier this season. And the striker insisted his differences with the club are now behind him.

But Tevez has always listened to his closest advisor Kia Joorabchian over financial and football matters.

If he does so again in the summer, City believe they will be facing another major battle.