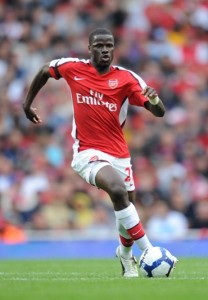 Interesting transfer news are out and it has been reported that Spanish champions FC Barcelona are said to be weighing up a January move for Arsenal full-back Emmanuel Eboue.

It is believed that the Spaniards need cover for Brazilian defender Dani Alves and have failed to land their first-choice target Shakhtar Donetsk’s right-back Dymtro Chygryskiy.

But reports in the Spanish press suggest Nou Camp boss Pep Guardiola has now turned his attentions to Eboue.

The 26-year-old Ivory Coast international has been in fine form for the Gunners this season and it is believed that the Catalans could launch a £7million raid for him in the next transfer window. I Will Stay as long as Arsenal wants me – Szczesny