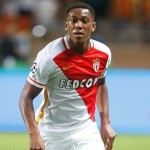 Reports are out claiming that Barcelona are eyeing Monaco striker Anthony Martial.

Martial is under consideration as a replacement for Chelsea signing Pedro.

Cadena Ser reported that Barcelona enquired about him last week.

With the elimination of the French side from the Champions League, against Valencia, the option to sign Martial is now viable.

The cost of the transfer would be €20m. Arsene Wenger Unsure If Arsenal Will Be Due Thomas Vermaelen Bonus