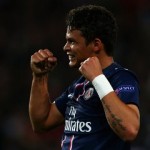 AS says Barca president Sandro Rosell’s ‘go-to’ man Raul Sanllehí will be in Brazil this week to meet with Thiago Silva’s agent.

Sanllehí was crucial in bringing forward Barca’s deal for Neymar with Santos last month and is now set for talks with Paulo Tonietto over Thiago Silva’s future.

He was at the Maracana last night for the Confederations Cup final and on Rosell’s orders, the hope is to have Tonietto give them encouragement to approach PSG about a fee for his client.