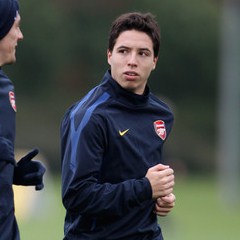 News from the Spanish League is out and it has been revealed that the form of Arsenal midfielder Samir Nasri has attracted the interest of Barcelona.

The 23 year old French international has emerged as one of the best players in the Premier League this season and is on target to break the 20-goal barrier this season from midfield.

Catalan media sources has now reported that the Spanish giants are keeping tabs on Nasri with the view to signing him for the 2011/12 season.

It is strongly believed that Barca coach Pep Guardiola has remained unhappy with his wide options ever since the departure of Thierry Henry and feels Nasri could be the solution.

There’s even talk that Barca will look to buy Nasri as an alternative if they cannot talk Arsenal down from their £45 million asking price for Cesc Fabregas.