Reports are out claiming that Leicester City star Riyad Mahrez has emerged on Barcelona’s transfer radar. 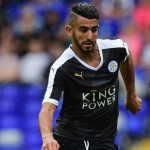 The Daily Mail suggests that the Algerian international winger is a shock candidate to replace Pedro Rodriguez at the Camp Nou after the Spain international left for Chelsea late in the summer window.

Mahrez has started the new Premier League season in fine fashion for the foxes, scoring four goals in four outings, and is now alongside the likes of Manchester City’s Jesus Navas and Celta Vigo’s Nolito as Barcelona continue their search for a Pedro replacement.

It is believed that Barca scouts will watch Mahrez over the next few weeks as they look towards the winter transfer market for a new winger.

Mahrez was also linked with a move to Arsenal during the last transfer window.