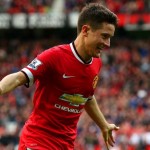 It has been revealed that Barcelona are watching Manchester United midfielder Ander Herrera.

El Mundo Deportivo claims that the Spanish midfielder’s performances have caught the eye of Barcelona.

With Xavi’s days at the club numbered and Andres Iniesta approaching his 31st birthday, a midfield revolution is already underway at Barça. Ivan Rakitic came in from Sevilla last summer and there are high hopes for youngsters Rafinha, Sergi Roberto, Alen Halilovic and Sergi Samper.

But Herrera, who has been linked with the Blaugrana since his time at Real Zaragoza, is viewed as a possible addition.

Barca won’t be allowed to work the transfer market until 2016.