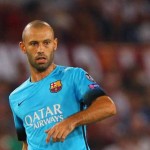 And Mascherano says it was Arsenal’s defensive weaknesses that Barca came looking to expose.

The former Liverpool star said: “We knew that Arsenal couldn’t maintain the intensity of the first few minutes. We knew that sooner or later we would find them disorganised at the back.

“And in the end that’s how it was. We seized the moment and we’ve taken a great victory that allows us to face the future with greater optimism.

“Clearly we’ve done a good job but I still don’t think it’s definite. They’re a team with a lot of quality that can make life difficult for anyone.”