It has been reported that Barcelona are continuing to track a pair of defenders as the 2014/15 La Liga season approaches. 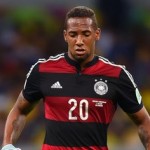 It is said that the Catalan giants are in pursuit of Arsenal captain Thomas Vermaelen but will keep an eye on Bayern Munich’s Jerome Boateng in case they fail to lure the Belgian to the Nou Camp.

28-year old Vermaelen has been linked with a £10million move to Barcelona but Manchester United have continued their interest in the former Ajax star who made just seven Premier League starts last season.

Boateng, who was a key part of Germany’s World Cup triumph in July, can operate anywhere in the back four and would bring versatility to Luis Enrique’s squad but is contracted with Bayern until 2018.