It has been reported that Barcelona have launched a bid for PSG defender Thiago Silva. 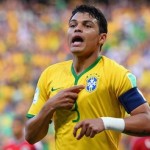 The Spanish giants remain in the market for a defensive signing following the retirement of skipper Carles Puyol.

Sportmediaset claims that Barca are preparing a €50 million offer for Thiago Silva after the World Cup.

The 29 year old central defender has made no secret of his wish to play for Barca in the future. Arsenal Will Not Exercise Buy-Back Option On Cesc Fabregas