Reports are out claiming that Barcelona have made a move for Juventus coach Max Allegri. 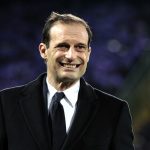 Premium Sport reports the Blaugrana have made contact with Allegri.

Barcelona have offered him 24 million euros across three seasons to manage at Camp Nou. His club are on course to win their third league title in a row. In the Champions League, he may well have a job audition as his team faces Barca.

Allegri had managed AC Milan for four years, winning Serie A in 2010-11 and an Italian Super Cup. Before that he also managed Cagliari.