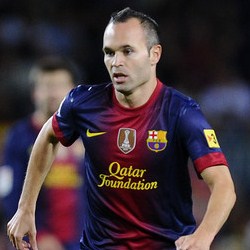 Bad news for all Barcelona fans as it has been revealed that Andres Iniesta has returned after his international duty with a muscle strain in his right leg and will be out for between 10 and 15 days.

The 28 year old will miss Saturday’s Liga match at Getafe and Wednesday’s Champions League Group G opener at home to Spartak Moscow but could be back for the Liga game against Granada a week on Saturday.

His Spain and Barca team-mate Jordi Alba, who was also called up for Friday’s friendly against Saudi Arabia and Tuesday’s World Cup qualifier in Georgia, has the flu and club medical staff will assess the full-back’s health again on Friday, Barca added.

Guardiola : I Never Said I Was Going To Leave!