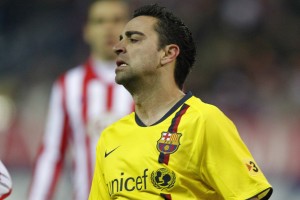 Barcelona have been hit by another injury blow with midfielder Xavi facing two weeks on the sidelines.

The Spain international was substituted towards the end of Sunday night’s 2-1 defeat to Atletico Madrid and tests on Monday revealed a thigh problem which is likely to keep him out for around 15 days.

Losing Xavi is a further setback for Barca, who also saw midfielder Seydou Keita limp out of the Atletico match after just five minutes with a hamstring injury that will see him missing for up to four weeks.