It has been reported that Barcelona midfielder Xavi has admitted that he is planning for his playing retirement. 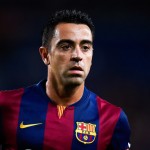 The former Spanish international midfielder is under contract with Barca until June 2016.

“I want to enjoy this stage and get as much from it, everyone tells me that it’s the best one.”

“After retiring I would like to coach and learn English,” Xavi said.

“I don’t know what the future will bring but I would like to be remain in football, and of course, with Barcelona.”


Mesut Ozil Confident Of Proving Himself At Arsenal