Reports are out claiming that Barcelona have offered Alex Song to Manchester United. 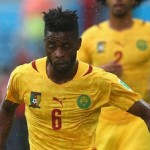 The Daily Mail reported that United have been offered Song from Barcelona.

The former Arsenal midfielder is available as Luis Enrique looks to fund buys for other areas.

The Cameroon midfielder left Arsenal in a £15million deal ahead of the 2012-13 season.