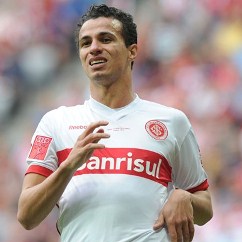 It has been revealed that Internacional striker Leandro Damiao is in talks with Barcelona.

The exciting Brazil international is expected to be sold by Inter during the January transfer market.

Tottenham had two offers for Damiao rejected over the summer, while Shakhtar Donetsk’s interest has also confirmed. Sergio Busquets Insists Real Madrid Can Have No Complaints