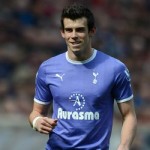 El Mundo Deportivo says Bale has shot to the top of Barcelona’s summer shopping list as Eric Abidal recovers from his liver transplant.

Bale recently said: “If you are talking about Barcelona or Real Madrid, two of the biggest clubs in the world, it’s a once-in-a-lifetime dream,’ he said. ‘If you said to any young player that you could play for Barcelona or Real would they turn it down? Probably not.”