It has been reported that Barcelona players are urging Pedro to stay this season. 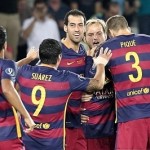 Pedro, linked with Manchester United and Manchester City, hit the winner for Barca in the UEFA Super Cup on Tuesday.

Marca claims that after the game his teammates all said they hoped he would stay at the club.

Some of the club’s big names, from Leo Messi and Andrea Iniesta to Javier Mascherano and Sergio Busquets, all made their feelings known. They were pleased to see him get the winning goal and the general feeling was that “he deserved it”.