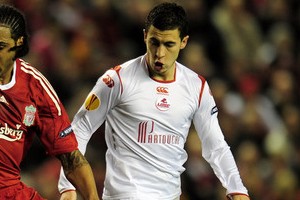 The Belgian teen has been likened to Real Madrid star Cristiano Ronaldo and is a long-term target for Arsenal, Chelsea and Manchester United.

It has been reported that Barcelona management are convinced of Hazard’s potential and willing to commit a stunning to bring the youngster to Spain.

Hazard has won back-to-back Ligue 1 Young Player of the Year awards in France.