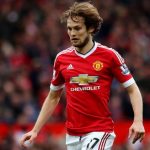 Reports are out claiming that Barcelona are preparing a bid for Manchester United defender Daley Blind.

The Dutch international star has emerged as an £14million transfer target for Barcelona — with Jose Mourinho reportedly not keen on the Dutch defender.

Sport says the 26-year-old is wanted by the Luis Enrique as cover in their under-strength defence.

Javier Mascherano has reportedly agreed a three-year deal with Juventus and Dani Alves could be going the same way.

Juan Mata is another Manchester United player under threat with the new Mourinho era set to start with a flurry of signings arriving at Old Trafford.