Reports are out claiming that Barcelona and PSG are chasing Athletic Bilbao defender Aymeric Laporte. 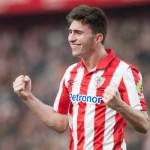 El Mundo Deportivo revealed that Barca want to sign a quality centre-half and have their sights on Laporte.

But they will face competition from PSG.

Laporte said this week: “I am calm.

“For years I’ve heard these things. It does not influence me and I think of nothing other than Athletic Bilbao. My clause is €50m? It is a figure that seems good and all parties are happy.”

Arsenal and Manchester United were also linked with the French defender.

Tom Cleverley Delighted To Be Back In Man Utd Starting XI