Reports are out claiming that Manchester City and Chelsea have been given a boost in their efforts to sign Paul Pogba from Juventus. 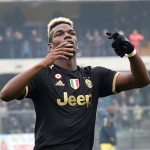 According to reports, Barcelona have pulled out of the race for the French midfielder because he is likely to cost them too much.

The Daily Mirror suggests that Barca have notified Juve that they will not go after the 22-year-old in a deal that would reportedly reach beyond £85million.

The Catalan club have given themselves self-imposed financial restrictions and will not move for Pogba at the end of the season as they seek a talented and youthful centre-half instead.

Pep Guardiola’s summer move to the Etihad Stadium gives City a strong chance of luring Pogba back to Manchester while Chelsea, who are eyeing Italy boss Antonio Conte and Bianconeri manager Max Allegri, are also in the running.

The West London club will be given an even better chance to sign Pogba if former Juve coach Conte or the current manager of the Turin giants make their way to Stamford Bridge to replace Guus Hiddink at the end of the season.

Guardiola : Fabregas Talks Only Shows Lack Of Respect To Arsenal!