It has been reported that Barcelona have announced agreement with Sergio Busquets over a new contract. 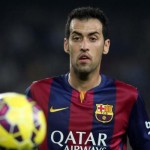 The Spanish international midfielder will sign his new deal today.

A statement from Barcelona read: “FC Barcelona have reached agreement with Sergio Busquets to extend his contract with the club until June 30th 2019, with an option for a further year after that.

“The contract will be signed on Friday lunchtime in the club offices at the Camp Nou.”