Reports are out claiming that Manchester United boss David Moyes is ready to revive his bid for Barcelona midfielder Cesc Fabregas. 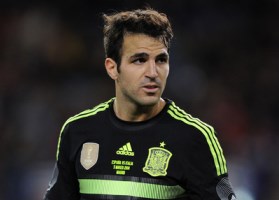 The Sun reported that United have been put on red alert after it emerged Barcelona are considering selling £40million-rated Cesc.

Moyes spent last summer chasing the former Arsenal skipper and had two bids turned down before Cesc decided to stay.

News that Barca will consider offers for Cesc this summer could see United reopen negotiations for the Spain international.