It has been revealed that Real Madrid and Barcelona were planning to scout Leicester City striker Jamie Vardy tonight. 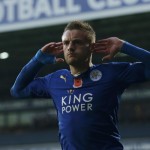 The Daily Mail says Real Madrid and Barcelona had detailed scouts to check on Vardy until injury ruled him out of England’s friendly against Spain in Alicante.

Vardy had been set to play centre forward in Roy Hodgson’s team and the Spanish giants were keen to see the Barclays Premier League’s 12-goal leading scorer in action against top-class defenders.

The 28-year-old was forced out with a minor groin problem which he hopes will have cleared up in time for Tuesday’s friendly against France at Wembley.

Vardy’s contract ends at the close of next season and Leicester will not stand in his way if a Champions League club moves for him.