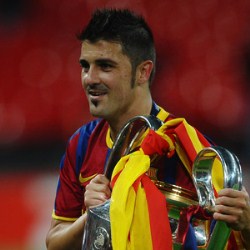 Sensational news are out and it has been revealed that Premier League giants Chelsea made a cash offer for Barcelona striker David Villa.

El Mundo Deportivo has reported that a call from Chelsea was fielded at Barca HQ last week with a Blues powerbroker making a €30 million offer for the World Cup winner.

However it was said that the bid was turned down flat by the Spanish champions, with Chelsea being referred to Villa’s €200 million buyout clause.

Xavi Confident Of Defeating Arsenal At The Nou Camp